As a child I spent a lot of time in the village of Sutton Valence, just outside Maidstone. My nan lived in a cul-de-sac called South Bank.  I had intended to make a drone video over Sutton Valence for quite a while, but the weather and time constraints have often stopped me in the past. 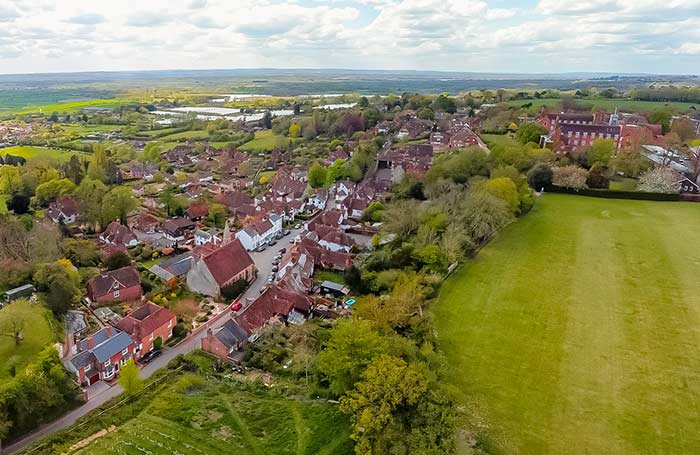 After looking at the weather forecast, I decided to make the 40 minute drive from Aylesham to Sutton Valence to finally get some aerial footage of this picturesque village in Kent.  I have taken some drone footage of the Sutton Valence Castle before with my DJI Mavic Mini 1, but this was the first time I had visited the village armed with my 4K enabled DJI Mini 2.

After I had parked the car in South Bank, Sutton Valence, I began to scout around looking for a suitable location to launch the drone from and maintain VLOS.  Sutton Valence felt a lot more congested that I remembered.  I struggled to find a take off location that would enable me to drone as much of the village as possible, but also to keep VLOS at all times.

Finally, I made the decision to take off from a small green.  I was surrounded by small trees and a few over head telephone wires, but with little wind and clear VLOS I was confident that I would be able to take off and land without getting into any bother.

Once the drone was in the air, I was able to fly the full length of Sutton Valence. As I was located in the middle of the village, I was able to go from one end of the village to the other without loosing sight of the Mini 2 as it flow effortlessly over the Kentish village.

I knew that a simple fly over would not give me enough video footage to create a drone video of Sutton Valance.  So I needed to find another suitable location to be able to get some other interesting angles with the drone.  I already had some experience flying over the Sutton Valence Castle, so I made my way to the 770 year old structure.

I have uploaded a print of the village of Sutton Valence on my Etsy shop page.  You can purchase prints of some of my drone photography from the Drones Deep Etsy Shop.