As part of my 20th wedding anniversary trip to Cornwall with the wife, I had the opportunity to do some filming over Lands End with a DJI Mini 2 drone.  After driving the six and a half hour trip from Kent to Cornwall, we arrived at Lands End at approximately 0630.  The sun was up, and we basically had Lands End to ourselves.  No other tourists in sight.

After a walk around some of the Lands End sights and scenery, we made our way back to the car to get the DJI Mini 2 and put it in the air.  Arriving back at the car, we found we had been joined by some fan assisted para-gliders.  They were busy preparing to fly around the Lands End land mark.  This was not good news for me.  I was not going to be in the air with those guys flying around.  After a quick chat with them, I knew I only had about 30 minutes drone flight time before they themselves were planning to be airborne.

I also had to check that Lands End was not in a no fly zone.  The Drone Assist app showed that I was close to, but not within a no fly zone.  It was lucky that I did not arrive a week earlier during the G7 conference in Cornwall as I would have not been able to launch the Mini 2 at all. 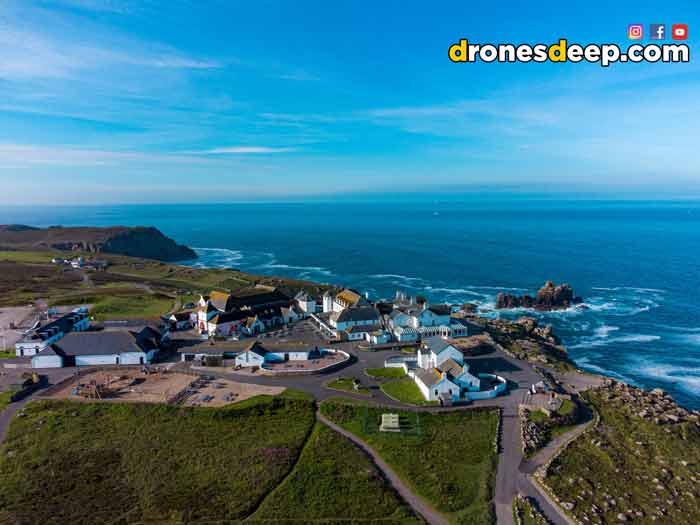 I managed to get approximately 25 minutes worth of aerial footage over the coastline of Lands End before landing so not to cause any issues for the para-gliders.  Being by the coast, it was a little too breezy to be too adventurous, so I kept the DJI Mini 2 flying very close the coastline and did not venture out to sea.  Looking back at the footage, I regret not being able to take the drone a little further out to sea and get some shots of the coastline from over the sea.

In conclusion, this was a frustrating flight.  I had the perfect location at a very quiet time of the day at this historic and popular British landmark, but I put safety first to allow the para-gliders to do their thing around the coastline of Lands End.